2017 is the
90th Anniversary of Flamingo Groves, the forerunner of Flamingo Gardens. The
founders, Floyd L. and Jane Wray, moved to Florida in 1925.  They were thrilled with their new home and the beauty of South Florida.  He had a good job selling property in Hollywood-by-the-Sea. 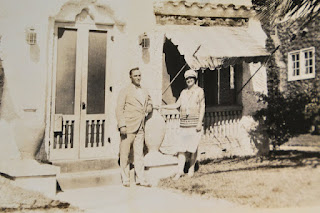 Then came 1926.  It was not a good year for South Florida or the Wrays. The real estate boom was
ending, and on September 19, a devastating
hurricane made landfall. 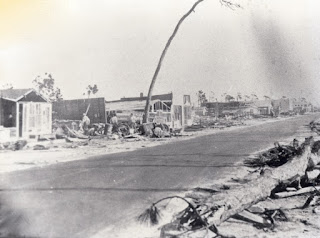 You can only
imagine how the Wrays felt after the storm subsided.  They were grateful they fared the storm better than most. But, with the real estate business
gone, Floyd knew he had to pick himself up and consider his options. He decided
on a venture that would take him in a whole new direction —
citrus. He believed he could make a go of it if he bought inexpensive land in the drained Everglades and grew a new
variety of summer oranges, and he was right.
By the end of 1926, the new plan was in motion. Mittie Meyers Chaplin writing about
her pioneer family noted they
sold three hundred and twenty acres of Everglade land six miles west of Davie and
somewhat higher than sea level than elsewhere to a young man. That
young man was Floyd L. Wray.

Flamingo
Groves was incorporated on January 2, 1927. The first bare-root Lu Gim Gong summer-ripening orange tree was
planted in the drained Everglades on February 22.  Forty acres were
planted that first year.
Beautiful
exotic botanical gardens were created with the
help of the Department of Agriculture, which provided
plants and seeds from around the world.
A flamingo pond was added and peacocks roamed the grounds.  Flamingo Groves became a South Florida show place. Other growers began to plant citrus until
western Davie was almost a continuous citrus grove.

Wray built retail outlets for his fruit and other citrus-related items, and the first modern packing and shipping plant in Broward County.  He was one of the first elected commissioners that turned Bay Mable Harbor into Port Everglades, a world-class shipping and cruise facility, in only five years.  He
continued to expand the groves and included virtually every variety of
citrus and other fruit trees suited to the climate.  Flamingo Groves covered nearly 2,000
acres at its peak.

Although all
the other groves eventually made way to development, Jane Wray had the foresight to create a
foundation to preserve the best 60 acres. Today, visitors from the state, country, and all around the world enjoy the botanical gardens and native wildlife exhibits. The historic Wray Home Museum shares Floyd and Jane’s history and their legacy.

It all began with that one tree planted so many years ago. Join
us in celebrating the 90th Anniversary at Flamingo Gardens this
year.