Some people call it July Fourth, others the Fourth of July.  Some fancy folks call it Independence Day, while most British people don’t call it anything special at all.  But whatever you call it, the day between July 3rd and July 5th is always a lot of fun here at Flamingo Gardens—and we like to get festive with our Old Fashioned Fourth of July celebration.

This year, there were watermelon and pie eating contests, sack races, spoon races, and lots of tunes from days gone by to help remind folks that Flamingo Gardens has been doing this a long time.  We’ve been hosting picnics and barbeques since our founding as a citrus grove and botanical garden way back in 1927. Get a load of this Flamingo Gardens BBQ picnic from the 1930s.  Love those classic threads!

Now, flamingos are famously NOT complainers, but I got to say that there is one thing that gets a little annoying on July 4th and it’s those birds that never need a comb– Abe & Liberty, the resident Bald Eagles.  They strut around from dawn to dusk acting like it’s their day or something.  Very serious birds.  As Liberty says, “There are no knock-knock jokes about Bald Eagles, because FREEDOM… RINGS!”
July 4th weekend was also the first chance many had to see the newest Flamingo Gardens resident—and she’s a purty one— meet Anne Marie. 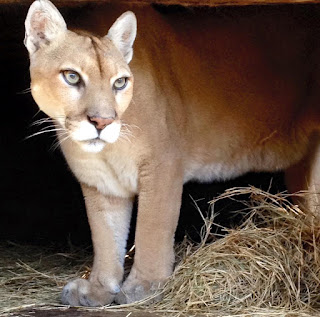 Anne Marie is a female Florida panther—and one look lets you know that the Sunshine State did good back in 1982 by naming these beautiful creatures the official state animal.   Florida panthers are still on the endangered species list, and we’re glad Anne Marie has found a home here in our naturalistic sanctuary—Flamingo Gardens only hosts permanently injured big cats which could not otherwise survive in the wild.
Anne Marie has been occupying her habitat alone to allow her to get used to it.  It won’t be long, however, until she’ll be joined by our 2 male Florida panthers, Bubba and Osceola. We’ll be monitoring everything in the hopes that everyone gets along.
Here’s a little trivia—Florida panthers lack the ability to roar.  Instead, they make distinctive sounds like chirps, growls, hisses, purrs, and whistles. And once those boy cats get a load of Anne Marie, it’s entirely within the realm of possibility that you’ll be hearing authentic Florida Panther whistles real soon. 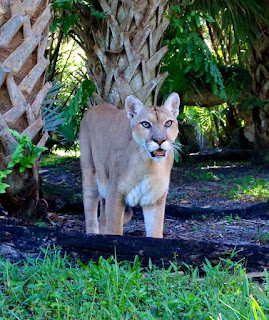 We’re sorry if you missed the Old Fashioned Fourth of July, but you’re welcome to stop by anytime!  Another good time is Wet & Wild Weekend, July 16th and 17th.  Cool your jets with 20 foot waterslides and water games, and it’s a HALF-PRICE WEEKEND!  Bring the kids—it won’t be too long until they’re back in school. You’ll have your sanity back, but then everything will be just too darn quiet.

This is MC Flamingo, signing off for Flamingo Gardens as always with impeccable timing and some skillful rhyming:
There’s a Florida panther named Anne Marie,
At Flamingo Gardens– you got to see.
She’s a beautiful cat, in her habitat.
With a stately walk like an aristocrat.
She’s safe and sound, with room to roam.
So welcome Anne Marie, to your brand new home. 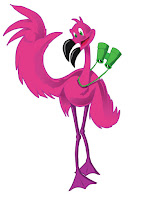 MC Flamingo is an author, explorer, poet, rapper, entertainer, emcee and all around celebrity among birds. MC, or just M as his friends call him, spends his days skimming for algae at Flamingo Pond and posing for the lady ‘mingos. At night he composes and writes about his experiences.
Bald Eagle Exhibit Florida Panther Exhibit